Another day at the Moscone center for the Red Hat Summit. 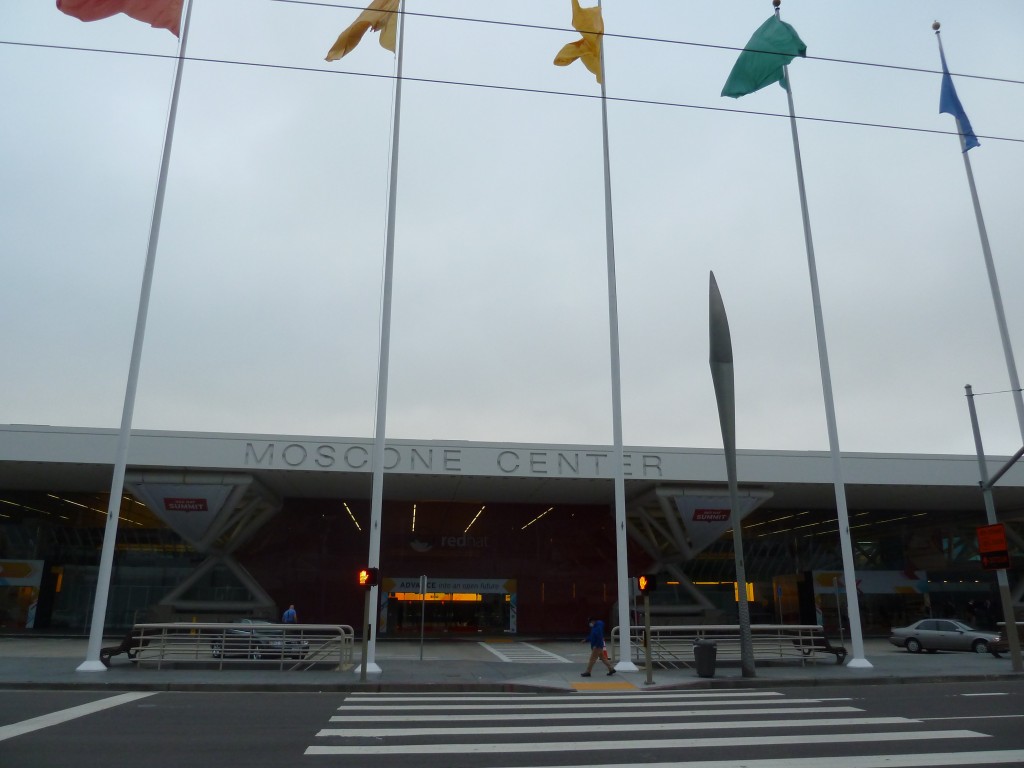 I did not really talk about the breakfast but this is how each day starts here. You grab a coffee, some pastries, some oatmeal and fruits like this: 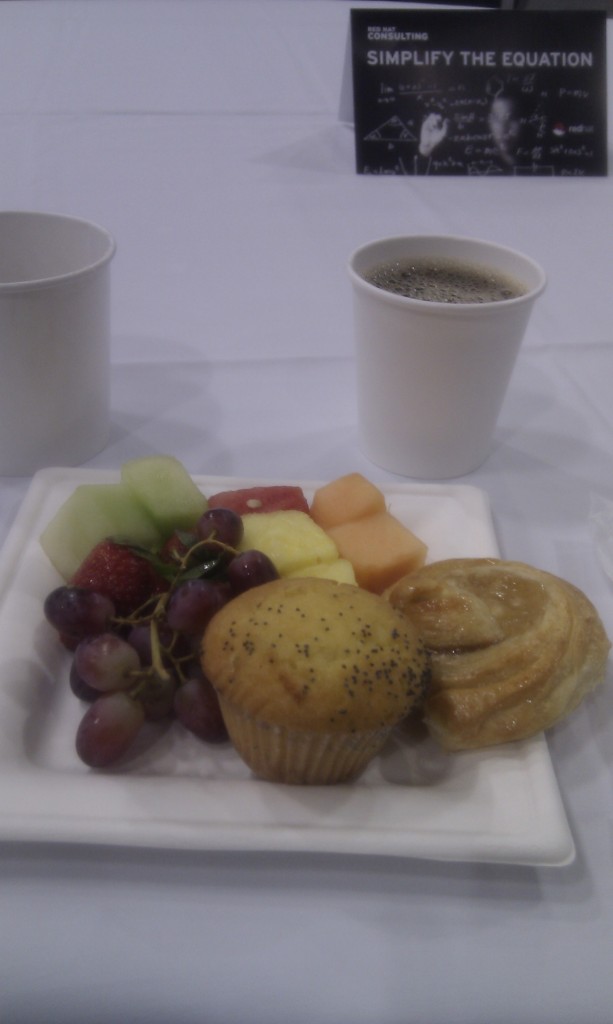 And then you sit at tables and you can talk with other people. That’s how I met people from the Clay Institute administrating super mega computers for scientific computations. Quite interesting to talk to these people, who were all workaholic sysadmins…

As usual, the day started with a keynote.

We had first a presentation from Steve Bandrowczak from HP. HP being a partner of the summit, the presentation is somehow following the pattern of the previous days. Steve indeed shared HP views on the current state of IT. His conclusion is that we are now in the era of mobiles, big data, social networks and cloud computing. To that regards, the IT solutions will have to lean toward simplicity, agility, velocity and cost efficiency.

Brian Stevens, CTO of Red Hat, then came on the stage where he quoted the different technologies Red Hat seems to focus on: Docker, Openshift, Openstack to address the cloud and DevOps (continuous integration and continuous deployment aka CICD) trends, as well as Red Hat Storage (based on GlusterFS) to address the Big Data trend.

The keynote ended with a presentation of Sam Greenblatt from Dell whose goals were clearly to show how the Dell hardware is very well adapted to the Red Hat recent solutions: Openshift, Openstack and GlusterFS.

This presentation from DevNation was very good, very concrete and very well suited for developers. OpenShift is a Paas solution of Red Hat – a bit like Google App Engine but with so-called “cartridge” where the developer can choose to make his own environment (e.g. an Apache, a Jboss server, a MongoDb instance…). OpenShift is open source so it can be deployed anywhere (in a private datacenter or on a public cloud like Amazon). But RedHat provides an OpenShift public instance deployed on Amazon, and where one can deploy anything they want. A free account gives us the right to have up to 3 OpenShift gear.

The slides can be found here: http://talks.thesteve0.com/summitdevintro

(in case you are wondering, the presentation is done with reveal.js).

The presenter did a demo on how to deploy some python code on OpenShift online. And he also deployed a JBoss EAP and a MongoDB instances. My impresssion is that it is very quick, much quicker at least than to request dedicated machines to administrators with custom software installed. Here we can play safely with anything we want. My opinion is that it is so far very good for a development/prototyping usage.

It seems the next development step of OpenShift will be to migrate their “cartridge” to the Docker container technology.

Sorry, no picture of lunch this time :-)

This session was full of people. Docker is trendy! Even though the 1.0 version has not been released yet.

Anyway, Docker is an open source container that enables applications and their dependencies to be encapsulated with the idea to be run anywhere. The idea is to code the application once inside a Docker container and then deploy it anywhere in a consistent and reliable manner (e.g. with the possibility to be scalable, resilient…). I suggest reader to have a look at their website to get a view on how it works.

The demo show how one can easily create a CentOS container with the Docker command tool. And indeed, it seems quite promising although some work still need to be done.

The presenters exposed what are the priorities to address before a 1.0 version can be eventually released:

Well, we can say this day was quite cloud-oriented for me. So Openstack is the Iaas solution proposed by Red Hat.

That was also very interested. During the presentation, we had a little demo where the presenters set up a virtual network of virtual hosts.

They used PackStack to quickly setup an empty Openstack environment they then did the following:

They also show the Horizon Dashboard, which is a pretty UI for doing all of this. I especially appreciated how the network topology is displayed in there.

After this presentation, I also took the note that I should try TryStack.org to just be familiar of what it is to be an OpenStack user.

That was quite atypic. This was the return of experience of two Red Hat engineers who participated in the migration from EAP 4/5 to 6 of the Red Hat own IT infrastructure! Quite interesting point of view, isn’t it? That took to these guys one year to complete their project. By the way, the title of the presentation doe not seem to be related to WW1.

What I learn from this presentation are a set of tools they used to ease their migration:

Get the most out of EAP6 & the JVM, Ståle W Perdersen & Andrig T Miller

A Red Hat team is always trying to improve the performance of the JBoss EAP for each release going out.

That was the subject of this presentation and it was the occasion to summarize what have been the performance improvements along the EAP releases from 6.0 to the future 6.3.

It seems in fact that most of the performance improvements has been done on Hibernate and Infinispan (also JSP processing are concerned for EAP 6.3). To that regards, the presenters described what they spotted and how they corrected the performance issues.

Not being a huge fan of Hibernate, I did note really noted the tips they gave about it. I however noted the tip concerning Infinispan where one should enforce it to use the ConcurrentHashMap of JDK8 for better efficiency (they are users of Java Mission Control). Also for socket descriptor in EAP 6.1 one should look at nio2 instead of the native connectors. I guess those tips should be easily found on the Web.

The next focus of the performance team for the next version of EAP will be:

I had some time in the evening so I did a little walk in the streets of San Francisco, up to Pier 39 where I saw the seagulls and the sea lions. There was a nice sunset over the Bay. 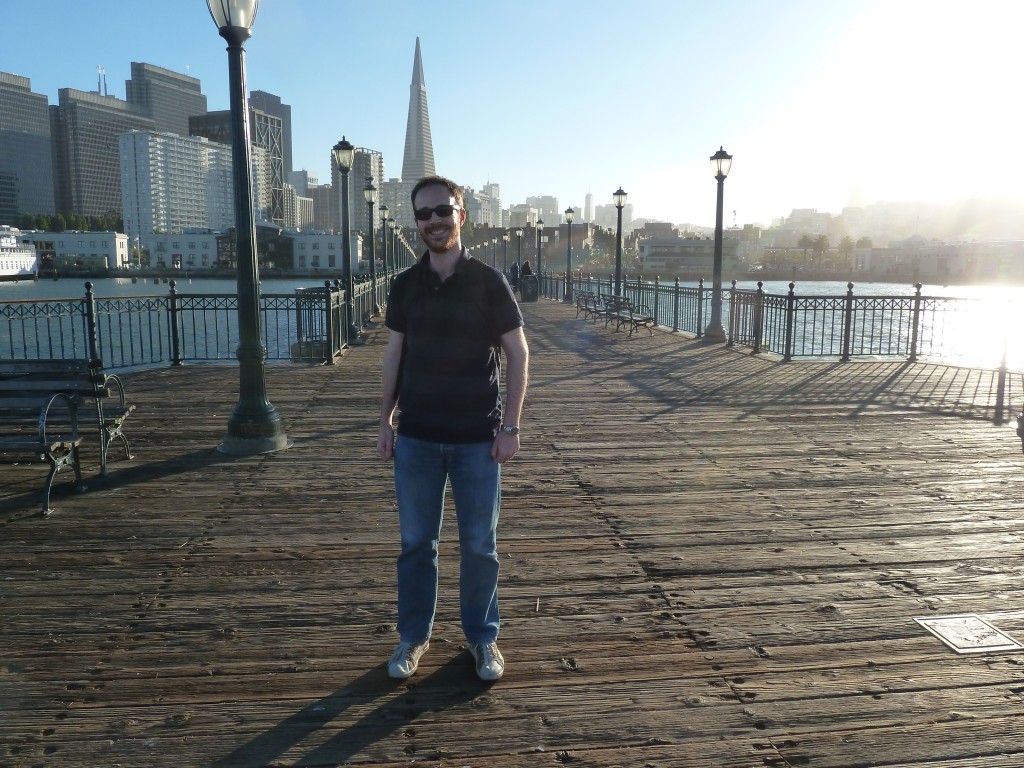 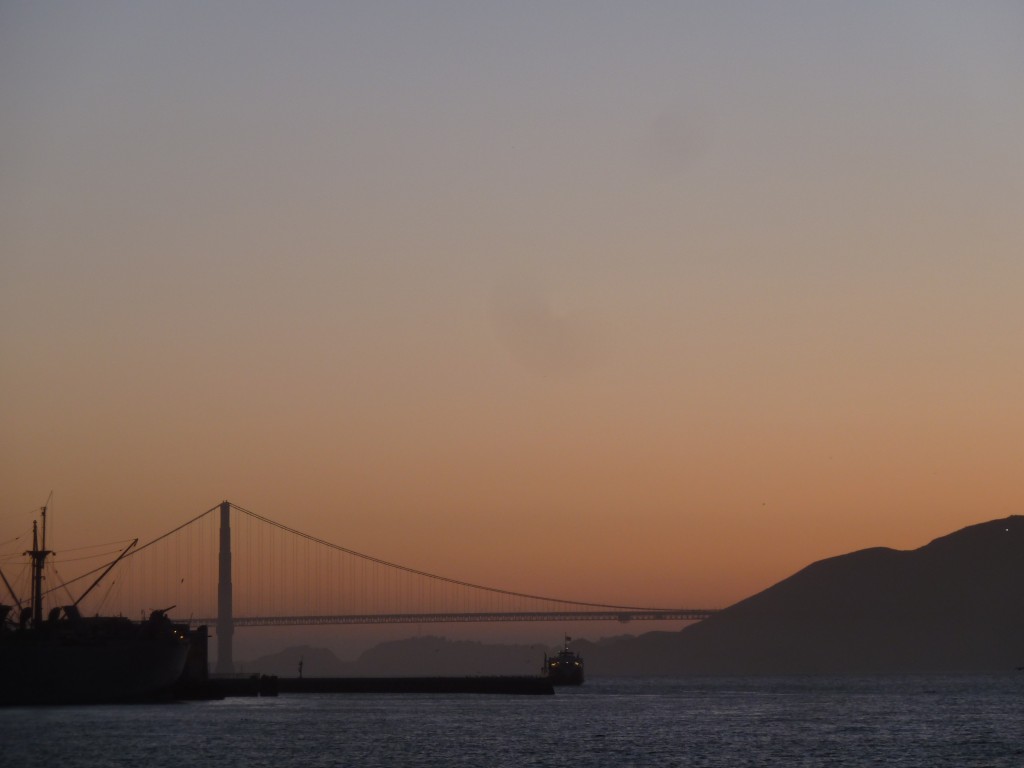 Tomorrow will be the last day of the summit and de facto my last day in San Francisco. Stay tuned for the epilogue of this journey.

2 thoughts on “Day 3 at Red Hat Summit and DevNation”